Last November 9 the Digital Communication Congress in the Valencian Community, focused on Data Journalism reached its eighth edition in the University of Valencia. As in previous years, the Congress hosted the interventions of journalism and communication academics and professionals, who presented their point of view and debated animatedly, among themselves and with the abundant public, formed by Journalism students of the University of Valencia and by professionals in the communication sector. 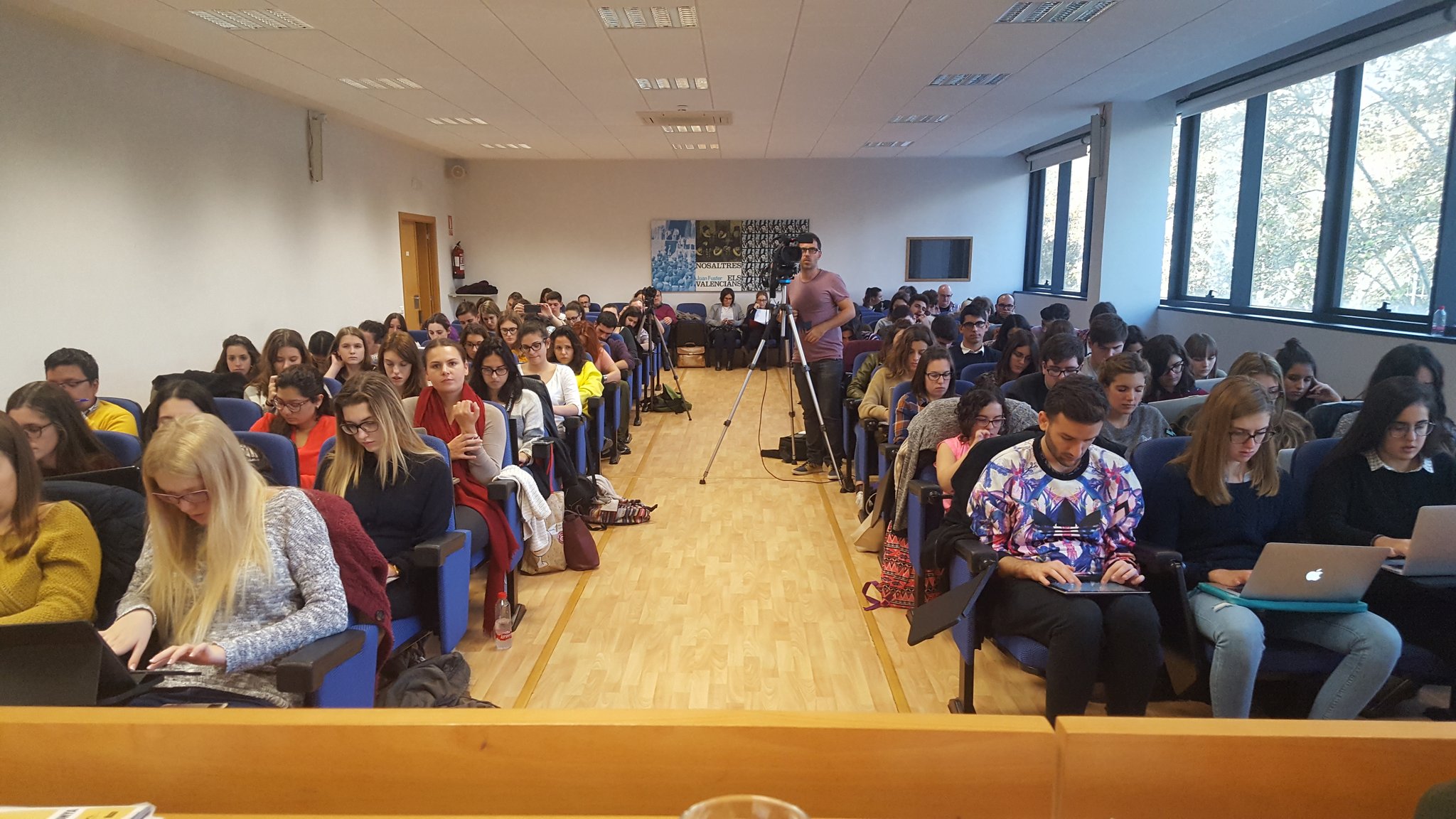 The public filled the Graduate Room of the Faculty of Philology, Translation and Communication of the UV

The Congress began with the conference of José Luis Dader, Professor of Journalism at the Complutense University of Madrid and the main exponent of research and analysis in Precision Journalism in Spain. In fact, Dader introduced this discipline in Spain in the 1990s, and in his conference he had the opportunity to reflect on the origins and evolution of the journalistic treatment of data: “From precision journalism to data journalism”.

Next, we continued with the round table “Data journalism in the Spanish media”, moderated by Lorena Cano, with the participation of journalists specialised in the subject: Antonio Delgado, from Datadista; Paula Guisado, from El Mundo; Rafel Montaner, from Levante-EMV; and – as it is almost a tradition in this Congress – José Cervera, from RTVE.es and ElDiario.es, among other media. The purpose of this table was to exchange experiences and perspectives on what data journalism is, what is being done in Spain and what could be done:

In the afternoon, we proceeded with the second round table of this Congress, complementary to the previous one: Teaching and professional practice in data journalism. A table of eclectic vocation, which combined perspectives of academics and professionals, linked around two disciplines that inevitably converge in Data Journalism, as its name suggests: journalism, on the one hand, and the treatment and analysis of data arranged in databases and computer platforms, on the other. The table, moderated by Guillermo López, was formed by Montserrat Quesada (Professor of Journalism at the Pompeu Fabra University), Juan Julián Merelo (Professor of Information Technology at the University of Granada), Juan Luis Manfredi (Full professor of Journalism at the University of Castile-La Mancha) and Jesús Escudero (El Confidencial):

Finally, we closed the first day with a round table focused on one of the main axes of the journalistic treatment of data: the field of science and its journalistic dissemination: entitled “Turning scientific data into stories”, moderated by Carolina Moreno and which included the participation of Óscar Ménendez (Spanish Association of Scientific Communication), Pampa García (SINC agency), Gloria Álvarez (Dubitare) and Michele Cantazaro (El Periódico de Cataluña and awarded as the best European science journalist of 2016):

The next day, Thursday 10, and in the magnificent setting of the library of Las Naves, we will finish this edition of the Congress with a very interesting practical workshop in Data Journalism taught by Antonio Delgado, of which there is no video, but a photo: