The ScienceFlows research team of the University of Valencia, together with Mediaflows researchers, coordinates the launch of the first IBERIFIER survey, with the aim of gathering the opinions of the public on the impact that the publication of false or erroneous news in the media could generate on the credibility and trust of people. As well as if the publication of disinformation could produce some time of economic impact on the communication industry in Spain and Portugal. The results obtained in the survey, together with interviews that will be carried out with media directors, will be published at the end of 2022 in an open access report for all citizens

The estimated time to respond to the survey is less than 5 minutes. The survey will be available in online format and will be open to anyone of legal age who reads the press (digital or printed), or who is informed through radio, television, or through other media platforms or social networks that allow them access to journalistic information.

The survey is completely anonymous and it is very important that those who reach the link answer all the questions, because without citizen collaboration, this study would not be possible to carry out. The answers will allow researchers to study whether or not citizens trust information from the media and whether the publication of false news decisively influences trust in the media. The estimated time to respond to the survey is less than 5 minutes.

IBERIFIER is a digital media observatory in Spain and Portugal promoted by the European Commission and linked to the European Digital Media Observatory (EDMO). Coordinated by the University of Navarra, it is formed by twelve universities, five verification organisations and news agencies, and six multidisciplinary research centres. 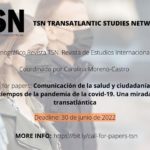 Call for papers: “Communication of health and citizenship in times of the covid-19 pandemic. A transatlantic look
Tweets por el @ScienceFlows.